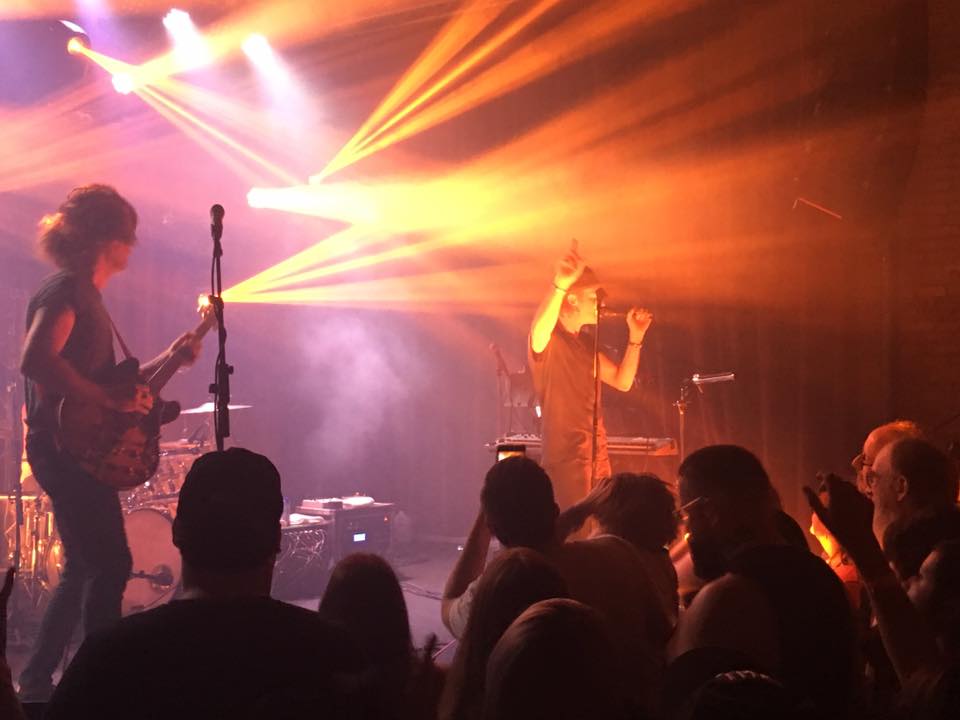 I’m struggling to get back in the swing of things after spending a weekend in Des Moines, Iowa with high school friends and the almighty Slipknot at The Iowa State Fair. Needless to say, going back to my day job on Monday was more than rough and when it came time to dragging my butt off the couch to head to a show on Monday night, well, it was not the easiest thing to do. That being said, Monday night’s show was a show that I wasn’t willing to miss no matter how exhausted, hungover, or just downright lazy I was feeling. When you go to a show nearly every night, it truly means something when you say a band has cracked your top ten live band list of all time. Well, The Faint, has cracked my top five and I just wasn’t going to let a chance to catch them live pass me by.

As if being able to catch The Faint wasn’t enough excitement for one night, opening the show was The Faint’s frontman Todd Fink’s new group, Closeness. It wouldn’t be a stretch to call this duo a supergroup. Sure, it’s a husband and wife team but when the husband is Todd from The Faint and the wife is Orenda Fink from Azure Ray you are left with a set that is so much more than just a written off opening set. Taking all of the best elements of The Faint and Azure Ray and swirling them together with a sense of love and magical connection between the two players, Closeness was damn close to perfection if not complete perfection. It was almost like a little teaser as to what was to come from The Faint but it was also something very refreshing and new. Last night was my first introduction to Closeness but I sure hope it isn’t my last. I’ll be keeping a very close eye on their calendar for a visit back to the Twin Cities.

Where Closeness was oddly bright, bubbly and full of life and energy, Ritual Howls, (who took the stage next) brought a sense of darkness to the bustling Fine Line but that’s not a bad thing. Think Gothic dungeon with booming bass sounds and a sense of eerie darkness that you just can’t look away from or stop hearing in your head, these guys had me captivated. For only a trio, this band is able to create a wall of sound that will hit you in the exact perfect way. Vocalist Paul Bancell has one of the most stunning baritone voices I have ever heard and, when mixed with the drum machine, heavy synth sounds and distorted bass, you are truly swept away into another world. Ritual Howls is a band that is unlike anything else I have ever heard and I’m still trying to figure out if I loved it or not but one thing is for sure– these guys have something that will captivate you without your permission. Like the music or not, there’s something unique and amazing about this trio.

The stage changeover between Ritual Howls and the Faint was a little lengthy but the ever-growing crowd didn’t seem to mind one bit. There was a sense of excitement in the air and for good reason. If you had seen The Faint before, you knew what was going to happen next and it would be something worthy of a Friday or Saturday night, not just another Monday. The lights went down, the smoke machine turned up, and then, just like that, the band appeared on stage, the lights started whizzing around the amped up audience and the music rang through the speakers. It may have been a Monday night everywhere else in Minneapolis but, in the Fine Line last night, it was definitely a Friday night party vibe and I was going to enjoy every last second of it.

The Faint has been blurring genre lines since 1995. The Omaha, Nebraska based group has a way of mixing indie, EDM, electronica, breakdowns and a little bit of everything in-between creating an infectious and insanely upbeat sound that many have tried to copy but have never even gotten close. Beyond their unique sound is The Faint’s truly stunning live show. From the pumping bass to the lights swirling around you and the crowd that is sure to be bouncing up and down to every beat, The Faint’s live show is so much more than just another show… it’s an experience. I’ve talked about it before so I won’t go deep into it but the energy at a Faint show is one of those vibes that I wish I could capture in a jar to save for a bummer of a day. There’s seriously no way to be in the crowd, listening to The Faint’s music, while having a frown on your face.

Eight full length albums, a smattering of EP’s and other random releases, The Faint have more than enough material to fill days on days of music. Their set on Monday night was around twenty songs and, even with so many releases, they were somehow able to play every single song I wanted to hear. New to old, slow to fast, bass heavy to synth heavy– their set was seriously a bit all over the place but it was the perfect mix for a crowd that clearly would have stood there for hours listening to anything that The Faint wanted to play.

This was a whole lot of rambling and I know this but honestly there’s just no way to describe a live show from The Faint. They are one of those bands that you just have to see and one that I will continue to see every chance I get. I may have been exhausted and out of it when walking into The Fine Line last night but I left feeling refreshed and ready to get back into the swing of things.