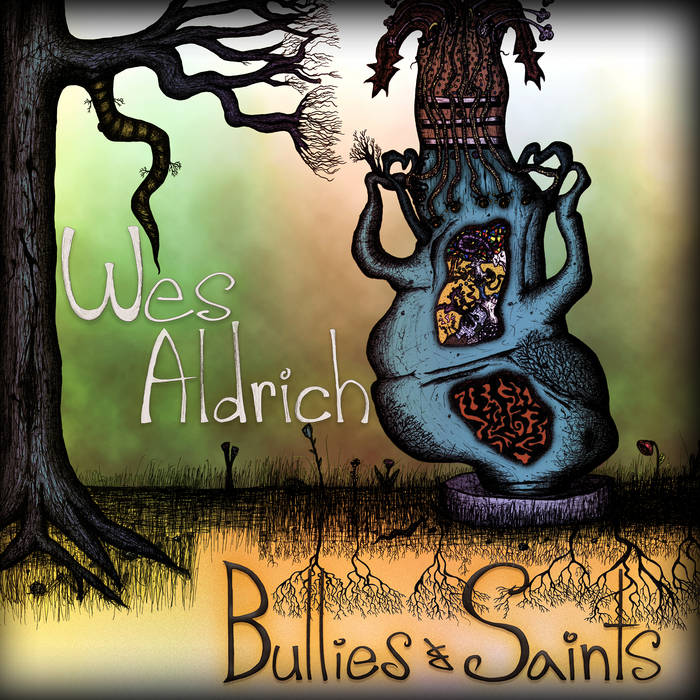 I instantly found myself in a field of some sort down in the south as soon as “Bullies and Saint”s took over my house. Wes’s undeniable southern twang mixed with his perfect country-drenched guitar work transported me away from the snow and I honestly couldn’t be more thankful. Not only did the overall sound take me somewhere warmer, his vocals and the words they were saying wrapped around me like a warm blanket. Although country is not typically my thing, The way Wes Aldrich pulls it off in this opening track has me sold.

“Losing All The Time” still has an undeniable southern twang to it but it brings an almost psychedelic feeling to the forefront which I found super intriguing. I’ve talked about dreamscapes before in my writings and this track is a perfect example of that. It’s a soft and fairly simplistic sounding track but it has so much going on in it that it captivates you instantly. Whether you’re trying to figure out all of the parts within this track or just letting yourself get lost in the guitar strums, this is an addicting track with a beautiful feeling attached to it. The beautiful feeling continues with “This Side of Town” but instead of being captivated by the instrumentation, I was caught by the words and Wes’s vocals. They tell a heartbreaking story which should make it one of those whiskey-drinking type sad songs but there’s something so delicate in the way the track is conveyed that it never quite reaches that dramatic of a level and somehow keeps an almost optimistic feeling to it no matter how dark the lyrics get.

Although “Picking Pockets” wasn’t my favorite track on this album, there’s no denying its place. This track really brings in a little bit of all of the elements heard in the previous tracks and puts them all together in a track that drives ahead with the help of a steady and somewhat prominent bass drum beat. That driving beat fades away as “Can’t Kill Me Now” takes over with a more simplistic feeling comparable to that in “Losing All The Time”. Again, Wes proves his songwriting skills in this track as the vocals really hit me right where it hurts. His words are raw but the tone he sings them with adds a twist and makes the tracks feel a little less sad. As someone who embraces the sad song life, I love this. It’s honestly the best of both worlds.

“Over My Shoulder” was an instant favorite of mine. I think it showcases everything about Wes Aldrich that I fell in love with during the previous tracks. Real lyrics, smooth vocals, simplistic yet intricate guitar work that enhances the vocals… this is just one of those songs that, although soft and sweet, had me just absolutely lost for words. I was so busy trying to find those words that I almost missed the transition into “Ghosts”. Honestly, had it not been for the intro that instantly reminded me of the southern swagger heard on “Bullies & Saints”, I probably would have remained lost in my head. “Ghosts” is a lot like “Over My Shoulder” as far as the tenderness of the words and vocals goes but there’s just a little bit more going on in this one.

That psychedelic feeling I got during “Losing All The Time” comes back to the forefront for “Down On My Luck”. Although not a huge fan of the psychedelic scene, I love the way that Wes has placed this element throughout this album. It never quite takes over for a full song but seems to just pop in and out. It’s kind of like his southern twang, although you can faintly hear it throughout the album, I feel like Wes knows where to put it so it pops just right instead of drowning the listener in it. I feel like this slower indie-pop sound is usually hit or miss for me but the way Wes shows restraint while constantly bringing in new elements and repeating previous ones really has me sold.

This album closes out with the beautiful “When We Were Young”. There’s no denying the beauty throughout this album but this ending tack really takes it to a new level. It’s sweet, sensitive, soft– it’s everything that Wes does so well and it’s down with his distinct heart-on-his-sleeve style. It’s honestly the perfect ending to the lovely journey that is ‘Bullies and Saints’.

My Favorite Track(s): “Over My Shoulder”

What My Cats Thought Of It: Autumn slept on the stairs; Artie slept upstairs

How Badly I Want To See This Performed Live: 5 out of 10

Check out ‘Bullies and Saints’ HERE!