I’m Collecting The Souls Of The Dead 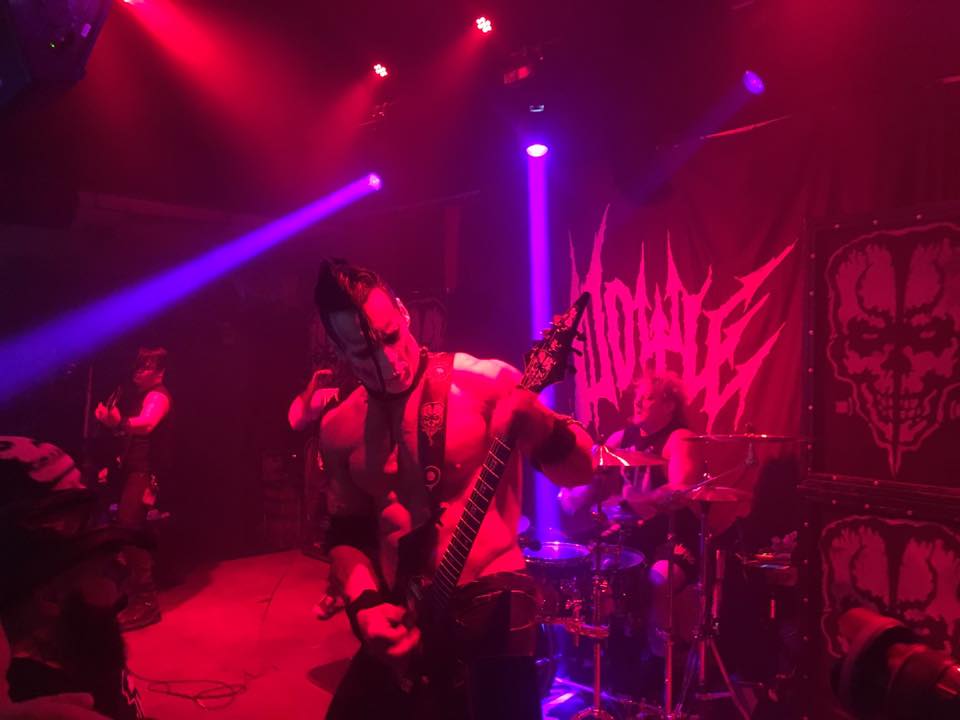 Last night was one of those nights where I got to see a living legend in a super intimate venue. Doyle was part of the legendary band The Misfits and, although I was never a super fan, there’s no denying their strength, power and influence as a group. Being able to see one of their members literally just a foot away from my face was nothing short of an experience and amazing. Although I was beyond excited to finally cross Doyle off my list, there were still four local bands to catch and, with a couple unknown names and a few personal favorites, my excitement level stayed high throughout the night.

Kicking the night off was local group Lucid Flight. They wasted no time in kicking into their set promptly at 6:20 PM even though the audience had yet to filled in but they didn’t let that affect their performance. Although clearly young, the fact that these guys gave a kick ass performance without letting the lack of crowd get to them was super impressive. Vocalist Reba Dougherty has a voice that can easily turn heads and make you pause on whatever conversation you were having. With so many bands and only about three hours to get through them all, Lucid Flight only had the chance to perform about half a dozen songs but those half dozen had me nodding along to the beat and wondering what will come next for this young band.

Although Clarity, the next band to take the stage, stuck out like a sore thumb in the line-up as far as genre goes, they instantly became a new favorite local of mine. I knew the second I saw singer Fernando Diaz’s t-shirt advertising The Maine (a favorite pop-punk band of mine) that I was going to be in love. What I didn’t expect was the way the crowd that was clearly there for a metal show would also love their music. Again, with a short set, I was left wanting so much more but what they gave the growing audience was a sweet sound of nostalgia without being cliche or overdone. The trio didn’t try to be anything more than what they were and that’s something that I truly appreciate. Sure, they didn’t exactly fit the bill but music is music and good music is something that knows no genres. Clarity is officially on my radar and should be on yours too.

Now, I know I called opening act Lucid Flight young but Agony Reigns, the third local to grace the stage, is younger than young. Honestly these kids are probably young enough to be my kids but don’t let that fool you. I’ve been catching these guys for a little while now and their thrashy-metal sound is cleaner and more creative than some of the veterans that I see time and time again. Their youth clearly brings a very fresh sound to a very classic genre and, as if that’s not enough, the talent behind these four kids is immense. I watched with my jaw nearly on the damn floor as they powered through their quick set with a sense of perfection that I only wish every local band could have. Beyond the perfection of their playing was their obvious love for the music. They each had this twinkle in their eye as they performed that I will never quite be able to put into words but what it said to me was they were delighted and honored to be on that stage last night and that look is something that not every local band sharing the stage with a legend has.

The last of the four locals was Bonefire. It had been awhile since I caught these guys but, within just a song, I was reminded why I fell head over heels for this band the first time I saw them. They brought a new sense of aggression and power to the night but still came off as very humbled to be sharing the stage with such a legend. Vocalist Ben Jimmick seemed to spend more time in the audience than on the stage and that definitely got the crowd warmed up and moving. Their intense old school punk sound was blended with a little hardcore, a little metal and a little bit of everything in-between. Even with a major guitar issue that left one of their two guitarists literally screw the neck back on his instrument mid-set, it was clear to see the talent and potential behind this act. They have a new album coming out soon which I hope leads to an album release show that I better see you at.

Finally it was time for the one and only Doyle Wolfgang von Frankenstein (better known as just Doyle). Doyle was the lead guitarist for famed horror punk band The Misfits but has been out with his own project aptly named “Doyle” for some time now. Right at 9PM, the larger than life character took the stage and I instantly froze. There was something about seeing this legend just an arm’s length away from me that had me absolutely star struck. Maybe it was the platform shoes or the size of his arms or the devil lock mixed with the corpsepaint (a devil lock is his signature look of a small section of hair that hangs in front of his face and comes to a point– corpsepaint is exactly what it sounds like- face paint making you look like a corpse), but seeing Doyle in person was nothing short of nightmare inducing but in the best way possible.

Doyle and his band powered through a short set with a sense of strength that only they could have. The music was fast and dirty and made you want to push your neighbor around a little bit which is exactly what was happening near the stage. Standing literally right in front of Doyle, it was hard not to just watch as he pounded at his guitar in his signature way (seriously, you have to watch him play– it’s mesmerizing). That being said, the other three band members did their best to hold their own and definitely kept up with Doyle musically and when it came to their personalities. It was hard not to laugh as vocalist Alex “Wolfman” Story introduced every song as a sort of love song in the most perfect National Public Radio voice before jumping into songs of aggression. The juxtaposition was perfect but didn’t feel scripted or ridiculous. It was clearly just some guys having fun on stage and that translated to the rowdy crowd perfectly. I could have stood there all night watching Doyle and his band as they destroyed my eardrums but, alas, all things must come to an end. After around a dozen songs that didn’t last long enough, the band left the stage and the audience made their way out to the crisp fall air.

Last night was one of those shows where I was literally right next to a legend. No, it never gets old.