Without You I’ll Be Miserable At Best 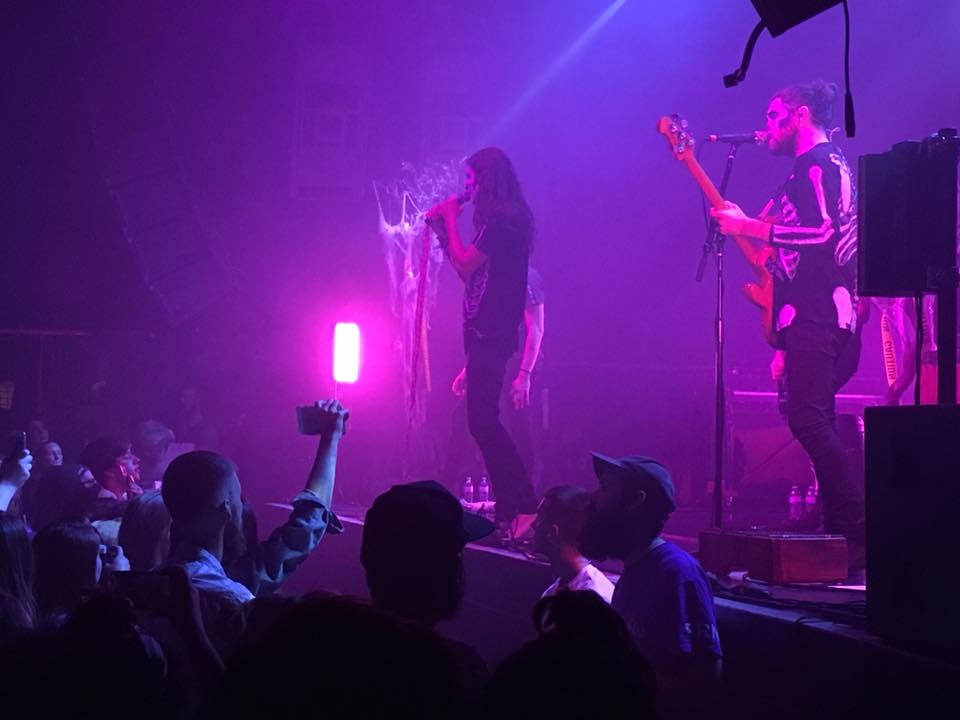 My Halloween costume this year is me circa 2006. I’m currently sitting at work with my hair spiked in the styling of Justin from Motion City Soundtrack, all of my 11 facial piercings in, a whole stick of eyeliner and dressed in all black with my hot pink knee high sneakers. That being said, it was only fitting that last night I relived my angsty emo teen years with a concert from Mayday Parade- one of the many bands that was a staple in my playlist back in the day.

Unfortunately I’m not in high school like I was back in the day and the 5:30 start time didn’t work with the unfortunate need for a day job so my apologies to Oh, Weatherly for missing their set. They are a band I have been wanting to catch for awhile now but it just wasn’t in the cards on Tuesday night. I sure hope they’ll be back and maybe not play while I’m stuck in the hell on earth called Minneapolis traffic.

I was able to get through traffic and to First Avenue just in time to see the one and only William Ryan Key take the stage. Better known for his work as the frontman in Yellowcard, William’s voice instantly took me away from the stress of my afternoon commute and had me fully at the concert both physically and mentally. Although I wasn’t the biggest Yellowcard fan growing up (they were a bit too poppy for me), I can’t deny that as soon as he jumped into a solo rendition of their hit song “Ocean Avenue” I found myself singing along to every word with a tear in my eye. He may not have had the band backing him but William’s voice was dead on and instantly took me back to my bedroom in my dad’s house. His set was short and sweet but packed a punch which definitely got the super young and eager crowd in the mood for what was to come.

Following the intimate set of Ryan William Key was This Wild Life. Although they came into the scene after my angsty high school years, their music caught my ear and, although I wouldn’t publicize it because I was trying to keep my reputation as a metal head, I loved every word they sang to me through my headphones. This California duo is sweet, soft, and everything nice. The first thing they said when they hit the stage was that they are the “Hot Topic Mumford & Sons” and honestly, there’s no better way to describe these guys. There’s something about the words they use and how they use them that easily hits you right in the feels. The combination of Kevin Jordan’s vocals and Anthony Del Grosso’s smooth guitar playing brought a sense of calm over First Avenue. Although mostly acoustic (there were drums on a couple of the first songs), there was a sense of energy behind the calmness that kept their set from feeling boring or sad. Sure, the music was emotional but that didn’t bring down the mood or attitudes of the youngsters that surrounded me.

Sets were short due to the curfew that all ages shows face here in The Twin Cities but I wasn’t complaining when Mayday Parade took the stage promptly at 8:10 PM. As soon as they burst onto the stage, a wave of nostalgia hit me like a pound of bricks. The five piece may have all been dressed up like skeletons complete with faces full of white and black makeup but they still looked exactly like all of the pictures from my old Alternative Press magazines that I would staple to me wall. It was honestly a bit too much and when they jumped into “Jersey” from their 2007 “A Lesson in Romantics” album that damn near changed my life, I just couldn’t take it anymore. I could feel my eyes swell up with tears and as embarrassing as it was, I found this odd sense of comfort in it.

With six full length albums out now, there was no way I was going to hear every song that made me fall in love with this band in the first place but they did a great job of throwing some of them in here and there. I absolutely loved the fact that, even though this tour was in support of their new release “Sunnyland”, they recognized that there were going to be many late twenty-somethings/ early thirty-somethings that were there purely for the nostalgia. As I always say, nostalgia is a hell of a drug and I couldn’t get enough of it while watching Mayday Parade play through their set.

What set Mayday Parade apart from the rest of the bands that came out during this era was their ability to go from a song that was super up-beat with an infectious vibe but then instantly bring it down to a level where you couldn’t help but let those tears run down your cheeks. Regardless of if they were play a more fast-paced pop song or one of their slower ballads about love and love lost, there was a clear passion for the music from all five members that kept the energy high. It’s crazy to think that these guys have been doing this since 2005 yet everytime I see them they still give me the same feeling of passion and love. They clearly haven’t gotten bored with making music and their fans clearly haven’t gotten bored with them. To say they are doing something right would be an understatement.

“Mayday Parade is an Emotion” That’s what the shirt I’m wearing today says and it completes my 2007 me costume perfectly. Was it an impulsive drunk buy? Possibly but it’s also the absolutely truth. Mayday Parade is an emotion and last night was proof.