And All You Want From Me Is A Broken Heart 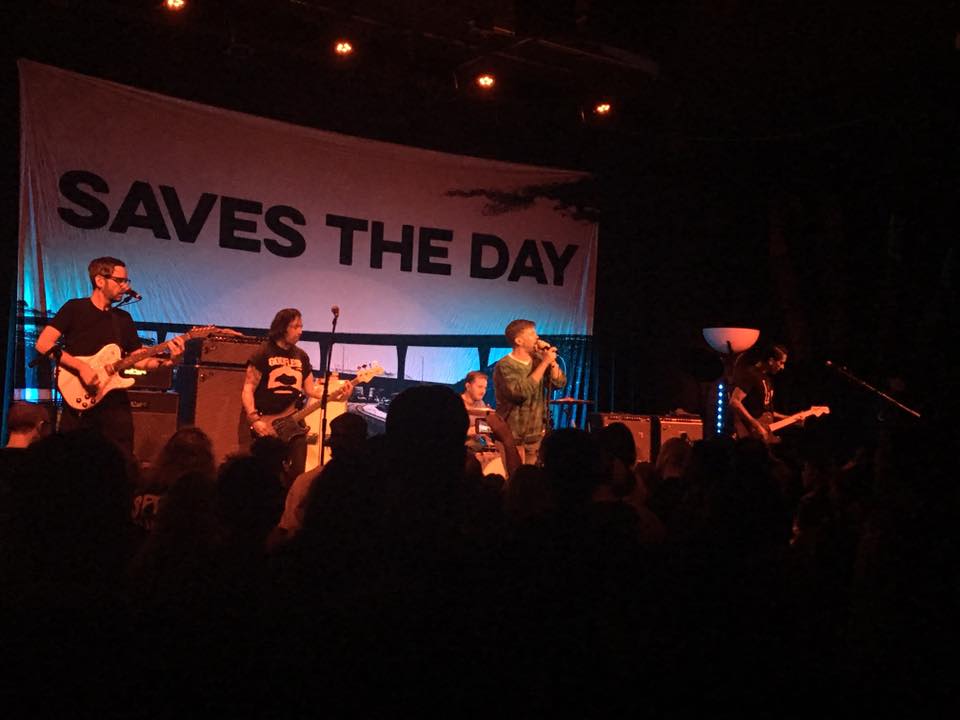 I scoured my notebooks of all the shows I’ve been to over the years looking for Saves The Day. As one of my favorite bands and one of the more influential bands in the scene, I was shocked to realize that I had never seen them. This just added to the excitement surrounding Thursday night’s show. Not only was I finally going to cross this monumental band off my bucket list, I was going to catch a new favorite of mine, a band I had never heard of, and it was all hosted at one of my favorite venues in the Twin Cities- The Cedar Cultural Center. It was going to be a great night and although I was rushed out of the door due to a last minute set time change, I was bright eyed and bushy tailed as I walked into The Cedar.

I walked in just as California based awakebutstillinbed was taking the stage. I wasn’t sure what to expect have barely even seen their name before and never hearing any of their music but I fell head over heels in love with this six piece within the first song. The amount of power and conviction this band radiates when performing is more than enough to knock you off of your feet. Highly emotional and raw, their music makes you feel anything and everything without you allowing it to. It’s relateable and almost calls out some of your deepest and darkest secrets even though you are unfamiliar with it. Although every band member was clearly in the zone and giving the quickly growing audience everything they had, it was vocalist Shannon Taylor who stole the spotlight throughout the opening set. Her performance was dynamic and full of energy but, more importantly, it was raw and felt at time likes she was reading out of a diary that could have been your own. I may have walked into the show not knowing a thing about awakebutstillinbed but I followed up their set with a deep breath and the knowledge that what I just saw was something extraordinary and I can not wait to experience it again.

I just caught Joyce Manor last October but that didn’t stop me from getting excited as the band took the stage. One of the newer bands to hit my daily playlist, Joyce Manor has an infectious sound that I just can’t get enough of and a live show that’s somehow dirty and punk while being clean and honest which will never get old. Their set on Thursday was expansive. Sure, their songs are quick and to the point but I honestly lost count after a dozen songs were played nearly back to back to back. Towards the end of the set, the band was taking requests from the audience who was eager to shout out names of songs dating back to the band’s 2009 demo. I watched in awe as the band wasted no time jumping into some of the deep cuts (although one caught them off guard and vocalist Barry Johnson was quick to give mad props to the man who shouted it out). Much like awakebutstillinbed, Joyce Manor had this sense of emotion radiating from the stage that was intense and perfect. I hope that Joyce Manor continues to come through Minneapolis on a regular basis because they are just one of those bands that I could see night after night and not get bored with it.

Closing out the already powerful and great night of music was the band I had been anxiously awaiting- Saves the Day. Vocalist Chris Conley may be the only original member left in this band but that didn’t stop me (and the rest of the crowd for that matter) from getting lost in a cloud of nostalgia as soon as the very first song started. That cloud surrounded me and the rest of the excited audience for twenty three songs that were all played without a single word being missed by the fans. Playing songs that spanned a good chunk of this band’s over twenty year, nine album career, they truly left no stone unturned and I would be shocked if anyone left the show wanting anything more (other than maybe about five more hours of music).

The crowd that had been energetic and rowdy during Joyce Manor’s set seemed to have found a sense of calm in Saves The Day’s portion of the night. The small pit that had opened up during Joyce Manor was replaced by people clearly lost in a cloud of nostalgia just swaying to the beat while singing their hearts out. The sense of family and community was strong. Although there were people from all walks of life scattered throughout the venue, everyone shared the common thread of Saves the Day which made for a heart warming experience. Add to the sense of community that always comes with shows at The Cedar Cultural Center and I was left with a night that was beyond beautiful both inside and out.

I honestly don’t know how I went so long without seeing Saves the Day live. They’ve been a staple in my playlist since high school and have always been one of those bands that I can always throw on if I have no clue what I want to listen to and be perfectly content with that decision. Their show was everything I wanted and then some. The easy to listen to music was matched with a laid back atmosphere that was completely irresistible. I may have never seen this band perform before but, after last night, I am already dreaming of the next time I get to catch them live.

I got home and wrote “Saves the Day” into my notebook of all of the bands I’ve seen this year. I honestly don’t know if I’ve ever written down a band in that notebook with such a giant smile on my face while doing so.