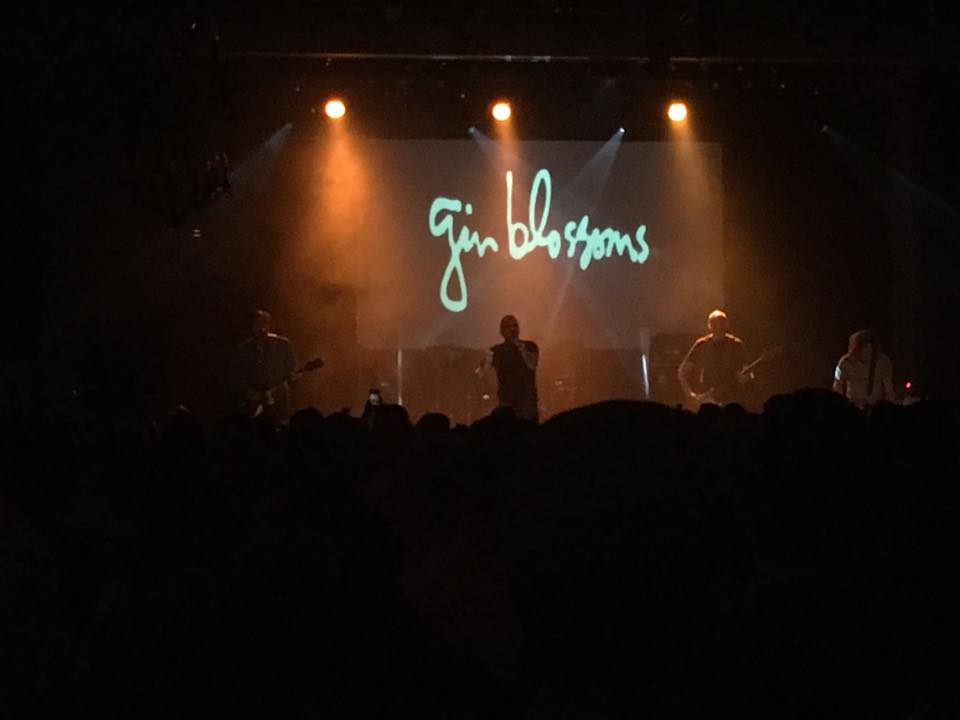 It’s very rare that my mom has any clue about the bands I go and see live but last night she caught me off guard. While walking up to the Varsity, I was on the phone explaining to her who I was going to see. I said the Gin Blossoms and went on to tell her her how they are one of my favorite “Holiday Pool Bands” (Holiday Pool was the local swimming pool that she would take my brother and I to growing up. They always had the best 90’s music playing so I always associate bands like The Gin Blossoms to Holiyday Pool). She stopped me before I could finish and, with a sense of excitement in her voice, explained that she really likes those guys and it should be a good show. Now, why she can’t say that when I go see bands like Cattle Decapitation and Goatwhore is beyond me but I’ll take what I can get and felt a new spark of excitement as I passed through security and into the damn near sold out show.

As excited as I was to see the Gin Blossoms, I was equally excited to catch opening act The Black Moods. I’ve seen these guys all over my social media lately but had yet to listen to any of their music but the buzz they were getting was more than enough to peak my interest. The Arizona based trio took the stage right at 8 and wasted no time jumping into what would be an extensive nearly hour long opening set. I was instantly hooked by this band’s music and energy. Although a fairly unknown local (although there were points that I caught majority of the audience singing along which made me feel a bit late to the party), they had no problem grabbing everyone’s attention and making everyone an instant fan.

There was something very lovable about these guys which is hard to put into words. Clearly they have been grinding and now that I do a quick search online for the band, they have definitely put in the miles as far as touring goes. That being said, there’s something very genuine and sweet about all three of these men. You knew they meant it when they thanked the crowd for paying attention and you shared their excitement as they explained that one of their songs has been sitting at number 25 on the Billboard charts (at least I think it was 25– apologies if I have the wrong number). Honestly, The Black Moods could have filled the entire night as their own and I don’t think there would have been a single complaint from anyone in the audience. I know they aren’t a new band but they are new to me and a lot of other people and I honestly can’t wait to see this trio take off as I know they will. They have the look, they have the sound, they honestly have it all.

After a fairly lengthy set changeover, the lights finally went down and the Gin Blossoms were spotted taking the stage. It didn’t take long for the older crowd to catch onto this and within the blink of an eye the roar of conversations turned into a deafening clash of cheering and screaming. I’m going to apologize right now for being this person but, have the Gin Blossoms even done anything since the 90’s? They had such a great sound with catchy songs but I honestly haven’t thought much about these guys since the days at Holiday Pool or on the days when I’m really feeling spicy and put on a 90’s pop-rock playlist to work to. Well, these guys never stopped doing their thing and put out an album as recently as last year proving that they are still a force to be reckoned with.

I was a little caught off guard by the way the crowd received the band. Whereas I thought these guys were strictly a band of nostalgia, the rest of the crowd was clearly a step ahead of me and there was a sense of excitement as the band played through a couple of newer tracks. Although majority of their set was a play through of their breakthrough 1992 album ‘New Miserable Experience’, the band treated the audience to a couple of new songs first. I loved the fact that they have stayed true to their blatant 90’s drenched sound while still having a modern feel to their music. Even though last night’s set was definitely a throwback and nostalgia fueled performance, I loved the fact that I was able to see that this band is still out there and still doing their thing and I’d be lying if I said I hadn’t spent this morning digging into some of their newer material and loving every second of it.

I honestly lost count of how many songs the Gin Blossoms performed but I know by the end of it all, I was left wanting so much more but also being completely satisfied by what they had given us. The rest of the crowd seemed more than happy with the evening too. It was clear that it was a bit of a “night away” for some of the older people in the crowd. A little rowdy while still feeling very much safe and comfortable, I’m sure babysitters in the area were making bank. There was a feeling of “you do you” in the crowd. There was no one there to judge you if you wanted to dance around like a fool or just stand there with your arms crossed in front of you. Everyone was just having a good time and it was truly one of those shows where it was impossible to leave without a smile on your face.

I went into last night on the hunt for a night of nostalgia. I got that but also so much more. Not only did I fall in love with a new band, but I also found a new sense of respect for a band that I considered somewhat of a one-hit-wonder. Sure, go to a concert just to hear that one song that was a hit that one year but also go with open ears ready to change your judgement and ready for whatever may happen.