Get Up On This Wisconsin Death Trip 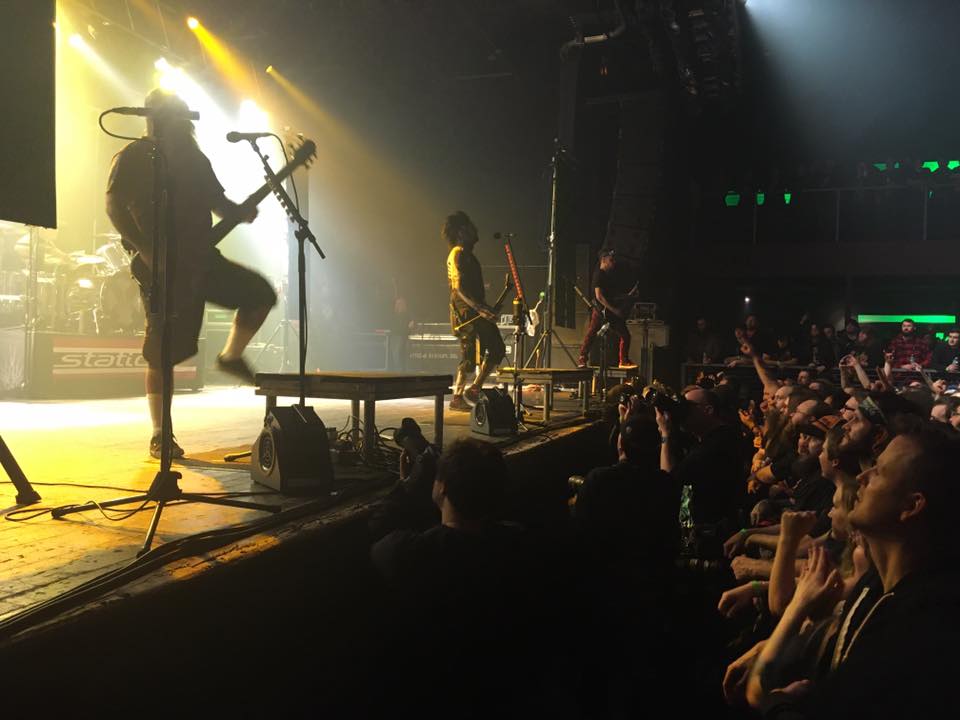 There was excitement, anticipation and a hint of nervousness when I walked into The Myth last night. Sure, it was a concert and a stacked line-up which had the people in the audience ready to go but there was also a sense of uncertainty as to what would happen when the headliner took the stage. Death happens. It’s a part of life. But how do you handle that when you lose your lead singer far too soon and you’re not quite ready to hang up the guitars? You do what Static-X did last night because it was absolutely perfect and, when paired with the rest of the night, made for one hell of a Wednesday evening.

Getting things started in the most perfect way possible was a personal favorite of mine- Raven Black. Fronted by the beautiful and charismatic Raven, Raven Black is one of those bands that you just have to see live in order to really get the just of it. There performance was a dark carnival of sorts complete with props that Raven would wave around on stage throughout the quick opening set. The music mirrors that creepy carnival like vibe with vocals that go from sweet and sugary to bitter and aggressive at the drop of a hat. A distinct mixture of industrial, goth, rock and metal when it comes to their sound makes this band stand out even more than their impressive stage show already does but it’s their attitudes that made me a fan the first time I saw them. Raven was clearly sick last night and even apologized to the crowd for feeling under the weather but that didn’t stop her and the rest of her band from chilling at the merch table for the rest of the show to meet fans. In a scene where egos seem to reign supreme, Raven Black is keeping things real and I will always be a fan of that.

The last time I saw Raven Black was with Wednesday 13 and Cradle of Filth so it felt natural that Wednesday 13 took the stage next. Having just seen both of these bands in March, I wasn’t expecting a huge change from either of them. Raven Black felt about the same but still just as exciting as the last time I saw them but something definitely had changed with Wednesday 13. Well known as the singer for The Murderdolls, Joseph Poole (AKA Wednesday 13) took the stage with his band and unleashed an almost odd and intriguing set on the audience. From the blacklight paint that dripped down his body to the odd hat he was wearing at the beginning of his set to the even odder mask of a face worn backwards to make him appear to have two faces and giving him the ability to created contorted like images with his body (yeah, there’s no good way to explain that), there was just something odd and completely different about this set from when I saw them in March. Although odd and maybe some of the visual effects didn’t hit me right due to where I was standing, there was no denying the strength and power this band still displayed on stage.

Dope is one of those bands that I honestly hadn’t thought of in years so as soon as they hit the stage, I was hit by a wave of nostalgia. Although it’s been a long time since their 2003 album “Group Therapy” was on repeat for me, this band clearly seems to have never really missed a beat. They have stayed true to their almost nu-metal vibe and the energetic stage show that I remember from back in the day. Although some of the members have changed, it was refreshing to see that vocalist Edsel Dope and bassist Acey Slade were still hanging on in this band and that just added to the feeling of nostalgia. Dope’s set ended with a surprisingly great cover of Dead Or Alive’s “You Spin Me Round (Like A Record)” and, just like that, they were off the stage and my nostalgic bliss was over– at least for the moment.

Following Dope was the one and only Mushroomhead who, if you’re even remotely plugged into the the rock scene, needs no introduction. I have to be honest, I’m not a huge fan of this band. Maybe it’s the old-school rivalry between them and Slipknot and the fact that I am an Iowan through and through (not getting into it but feel free to look it up) or maybe their music just doesn’t do it for me. Regardless, this is one of those bands that, although their sound isn’t my thing, their live show absolutely is so I keep on coming back for me. Mushroomhead is notorious for their creepy masks and their water drums. What are water drums you might ask? They are literally giant drums with water on top of the heads that, when hit, creates a super cool visual of water splashing up. This visual is enhanced by LED lights creating a seriously amazing look that is impossible to turn away from. Their aggressive and heavy music rang through the venue and was clearly just what the audience needed to wake up a little bit. The calm of the crowd was over and, although there had been pushing and shoving throughout the night, it seemed to really hit it’s stride during Mushroomhead’s twelve song set.

Although the line-up on this show was impressive, it was headliner Static-X that really deserves the attention from last night’s show. Much like Dope, Static-X is one of those bands that I really haven’t thought of since my younger years other than a couple of months of non-stop listening after vocalist Wayne Static died far too soon in 2014 so when they took the stage on Wednesday and jumped into a set full of songs spanning the entirety of their over twenty year long career, I was hit, yet again, with a wave of nostalgia. I have to be honest, it was weird to see this band without the iconic Wayne Static behind the microphone but Xer0 (the vocalist who has taken over) definitely did his best to stay true to Wayne’s style and sound while keeping it clear that he is not Wayne nor will he ever be.

I’ve seen bands after the death of a member a couple of times before and I’m always struck but how the band and audience memorializes fallen members. There were subtle reminders of Wayne Static throughout Static-X’s nearly twenty song set and an undeniable sense of celebration. I’ve always preached about the power of music but I think it’s at shows like last night’s that you really get to feel that magic. People were pushing and shoving while screaming their hearts out as if trying to make sure Wayne Static could hear every word. Some would argue that Wayne Static was Static-X and, full disclosure, I was one of those people until last night. Static-X has powered through their rough patch and I honestly think they will be back on top in no time all the while keeping Wayne’s memory alive.

Last night was a massive show and by the time it was all done, I was exhausted and my feet and back were throbbing. Yeah, maybe I’m getting to old for this all but that magic felt last night is something that is completely irresistible.

Average Age of the Crowd-35

Spotted Flying Through The Air- A Couple Of Bodies

Idiots Taken Out By Security- 1

Show on Deck- Emarosa/ Vaines/ Too Close to Touch