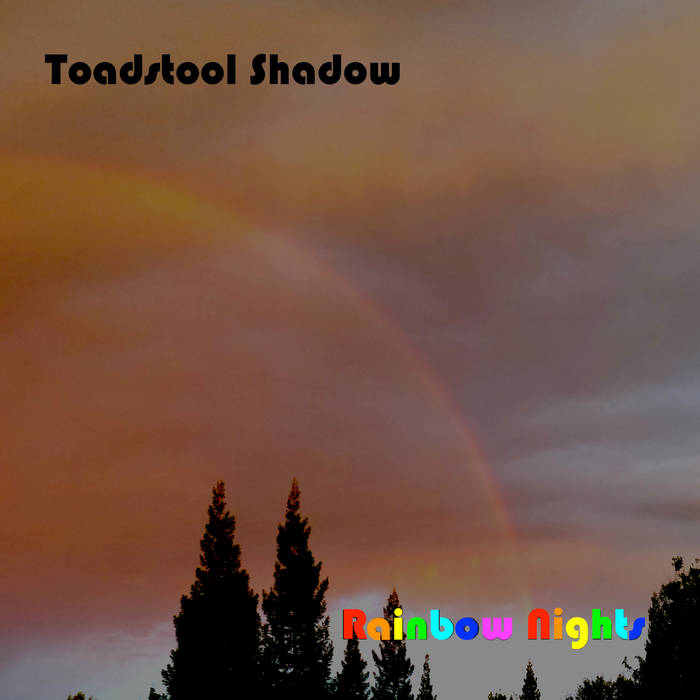 “Toadstool Shadow is the #1 elfcore music & arts collective in southern Ohio”. Dear Toadstool Shadow, you know how to peak my interest. Although I don’t quite know what “elfcore music” is, I’m intrigued so let’s check out this album and see what this band is all about!

As soon as “In the Court of the Elven Queen” took over my house, I was transported into a whole other world that I have never visited before. This opening track is intriguing but I feel like it doesn’t quite set the stage for Toadstool Shadow’s sound, more sets the stage for an epic journey that ‘Rainbow Nights’ is sure to be. It isn’t until “Astral Minutes” took over that I really got some insight into the sound of this band. A little folksy and a whole lot of whimsy, there’s something a little psychedelic about the vibe of this second track. I can’t say that this sound surprised me because I honestly had no clue what to expect when I put this album into my stereo but it was an interesting sound that continued to drag me deeper into the world that is Toadstool Shadow.

“Under a Toadstool” is quick at just under two and a half minutes but it continues to tell this epic story that had me completely and hopelessly captivated. Although the music isn’t quite for me, the story-telling nature of this album absolutely is. Along with this CD came a thoughtful note explaining the concept of this band and release. There’s so much thought put into every track on this album and this band in general that it is impossible to not fall in love.

There are playful sounds throughout this album but you really hear them as “Red Night” starts. These little quirks add to the whimsy that is already heard loud and clear throughout this journey. It took me a second to catch on but “Red Night” is followed by “Orange Night” which is followed by “Yellow Night”– see what’s happening here? I love that each color brings a different temperament to this album. Whereas “Red Night” really focuses on the whimsical aspect of this band, “Orange Night” brings a little more ambiance and space to the table. “Yellow Night” brings back the whimsy of “Red Night” but with a more playful undertone to it. The beat seems to drag ever so slightly as auto-tuned vocals (albeit scarce) soar over the 8-bit soundtrack.

The journey through the rainbow continues with “Green Night” which really expands on the auto-tune and 8-bit sound of “Yellow Night”. Although I’m not a videogame type of gal, I appreciated this throwback to the retro games of years gone by. There’s a sense of depth that comes with “Blue Night” and the words of this track. Definitely the wordiest of the colors, I loved that this track is a story in itself while being part of the bigger story and journey that is “Rainbow Nights”. Although I found it hard to follow the overall story throughout this album, I am chalking that up to the fact that I’m trying to take it all in and pick out elements to showcase instead of looking at this album as a whole.

By the time I got to “Silver Night”, I was starting to get a feel for what elfcore is. I’m not going to say that I’m going to be joining the cosplay world as an elf or anything but as this track played through and gave in to “Purple Night”, I couldn’t help but imagine myself being in this world. I love bands that can transport you away from wherever you are with just the power of their music and that’s exactly what Toadstool Shadow does with this journey through the colors. Sadly, “Purple Night” is the final color to go through but as it faded out, I found myself excited to see how the entire journey comes to an end in the final two tracks.

“Good to Be Here Now” brings back some of the playfulness from the previous tracks and really showcases it. A whimsical ending to a whimsical journey, this track perfectly caps off the journey through the colors. Although the words elude to the journey through the rainbow, I love how the words also seem to nod to friendships and love. “Good to be anywhere, as long as I’m with you”. I mean, come on, those are some sweet words.’

This entire epic journey ends with “Rainbow Days”. Much like “Good to Be Here Now”, this track just seems to give you an overview of the entire trip you just went on throughout this album. From the quirky sounds to the psychedelic vibes, I just loved how this track closes out this journey while leaving you with multiple elements heard previously as if to urge you to go on this journey again or carry on with the journey (I have some insider information that says there will be a second part to this saga!).

I’ll be honest, musically I’m not sure that Toadstool Shadow is for me but the way this album is a story, a journey, a vacation, absolutely had me sold. “Fairytale Opera” is how this album was described to me in the note that came with the album and honestly that pins this release and band perfectly. This is so different from everything else and has so much creativity throughout, it’s impossible to not get lost in ‘Rainbow Nights’.

What My Cats Thought Of It: Artie laid on the back of the couch; Autumn slept upstairs

How Badly I Want To See This Performed Live: 6 out of 10