But Now We’re Stressed Out 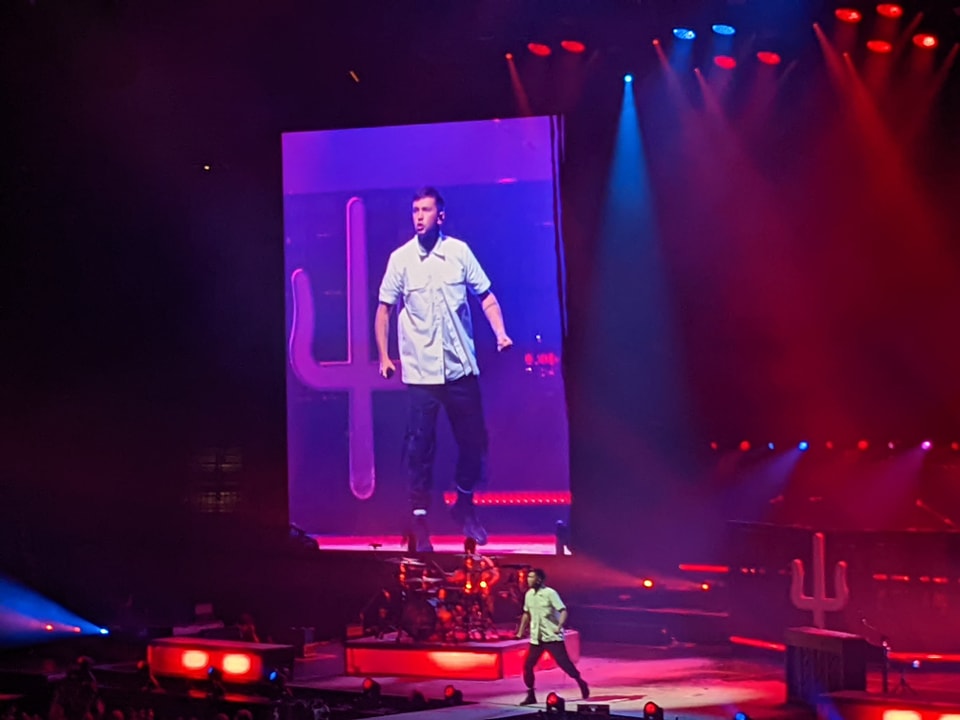 I had a whirlwind trip down to Des Moines, Iowa over the past couple of days. From being a bit burnt out from work to going viral for saying some bad things about Motley Crue, I needed the step back from things to clear my head a bit but, come Thursday morning, I was so ready to get back to civilization (aka a “real” city) and get back to my schedule of work all day and work all night but in a good way so I was more than thankful that as soon as I got home, I had a show to look forward to and a bucket list one at that.

Xcel Energy Center in downtown Saint Paul was filling up quickly as I got out of the sudden downpour of rain and into the arena. People were excited and rushed to their seats. I got to mine just in time for the lights to go down and for opening act Peter McPoland to take the stage. Don’t feel bad if you aren’t familiar with Peter’s name. I wasn’t either and neither was the majority of the audience but I quickly wanted to know everything about this young man. Sadly, there isn’t much online about his history but maybe that’s a good thing. Peter and his band came off as fresh, fun, and with something to prove as they blew through their thirty-minute set. Peter’s sound is very folk-pop with a garage-rock vibe. Think The Front Bottoms and Hobo Johnson but with a more wholesome and younger vibe. The young family behind me wasn’t really having it and had dubbed Peter “Peter McBoring” but I think that was unfair. Even though the music was an interesting opening act for what was to come, I loved the energy that the entire band was giving the audience. Peter stated that this was easily the biggest show they had ever played but, had he not said that, I probably wouldn’t have noticed. He and the rest of the musicians on stage had no problem captivating the entire audience within their quick set and I am sure they have some new fans after their set.

Headlining the packed Thursday night show was Ohio-bred duo Twenty One Pilots. This band absolutely has one of those “love them or hate them” reputations and I have always kind off teetered on where I fall when it comes to them. On the one hand, I found their music and lyrics relatable at times and loved their seamless blend of genres but, at others, I found that their music felt just a bit too mass-produced and commercial for me to fall deep into them. Regardless, their live show is something of legend and I was so excited to see and experience it for myself. As I always say, you really don’t know anything about a band until you see them live and I will give everyone a chance. After experiencing the opening night of their Icy Tour, I can firmly say I have a strong opinion of this band.

Being a huge arena show, I was absolutely expecting a certain level of production value but Twenty One Pilot’s twenty-five-song set but I wasn’t expecting the connection I got. Clearly singing and performing live the majority of the set (if not all of it), vocalist Tyler Joseph and drummer Josh Dun easily connected with everyone in the audience regardless of how far away their seat was from the stage. On top of that was the fabulous band backing them. Each band member spent their own time in the spotlight and was featured multiple times throughout the set but just the addition of the live instruments when everything could have been easily tracked and the spotlight just kept on the two main players of the group really said something about the true talent and creativity of the band.

Don’t get me wrong, this show was not without its fair share of pyro, stunning visuals, and other production value-type things but instead of relying on those “stunts”, they truly just enhanced the show. From backflips off of the piano to a moment where Tyler Joseph bolted off of the stage and lept off into what I assume was a small cushion, the production elements that the duo used kept the show feeling super excited but still felt a bit understated for what they could have done. I also was surprised when Tyler Joseph walked through the crowd to get from the main stage to a smaller stage where he performed a few songs for those in the back of the arena. I know a lot of large artists do this but, with such a devoted fan base as Twenty One Pilots has, this was a bold move but one that came off as a genuine way for the band to connect even more with their cult-like following.

Musically, Twenty One Pilots is all over the place. Overall, it’s commercial pop music but it has elements of hip-hop, rap, and even punk intertwined throughout the tracks, and seeing them seamlessly transition between all of these genres between songs and even mid-song was stunning. The changes in the mood of their music are drastic but, when mixed with their undeniable powerful stage presence, the audience was left with a truly jaw-dropping experience that was absolutely worth the ticket price and overall stress of attending an arena show.

Thursday night was the first night of The Icy Tour which will last over a month and take the band throughout the USA and Canada. Regardless of your thoughts on this band, I highly urge you to go check out this tour when it comes close to you. Even if you have to drive a bit, it is more than worth it and, even if you have written this band off, I think their live show is something that you absolutely have to experience. It may not make you want to listen to this band 24-7 or spend your life savings on their merchandise but I absolutely think it will make you see this group in a new light that they deserve to be seen in.

Average Age of the Crowd: 19

Crowd Surfers- None Seen But This Is a Huge Arena

Amount of Beer Spilled On Me While Walking Around- $0

Passed Out Kids- None

Idiots Taken Out By Security – 0