See You In Hell 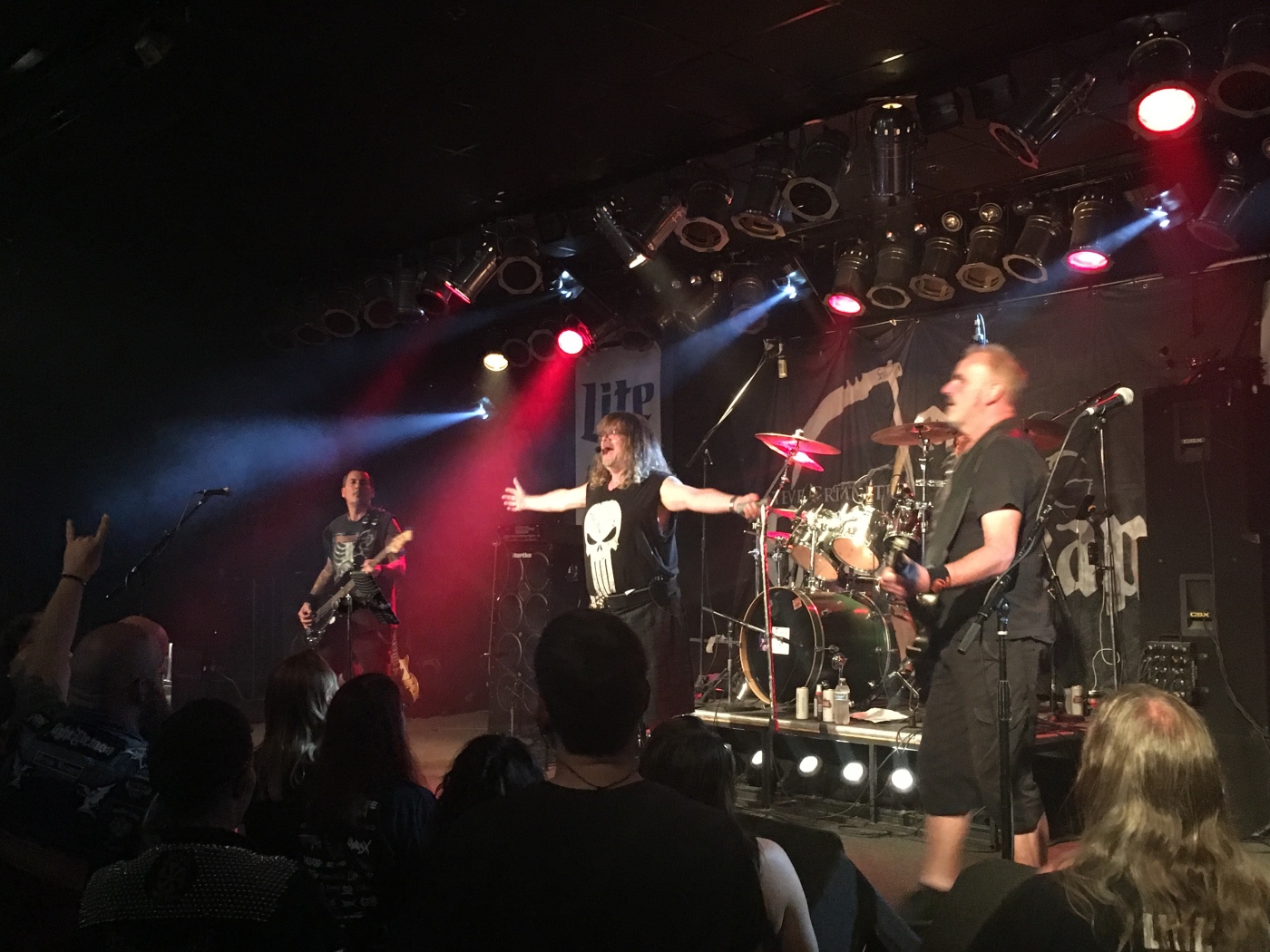 Although neither the venue or the headlining act of last night’s show are new, they were new to me making last night a bit of an adventure. Full disclosure, I was a bit hesitant to even go. The venue was about twenty minutes away from home, the band is old (sorry, not sorry) and, well, I was feeling lazy and the weather has been perfect sleeping weather lately. My Alexa reminded me right at 7:15 that it was time to go. I begrudgingly left my cozy apartment, got in my car and made my way through Minneapolis and found myself at The Route 47 Pub & Grub.

An unassuming bar and grill situated at the corner of a strip mall on the far outskirts of civilization (just kidding, it’s really not far from downtown but I’m a downtown kind of girl), I walked in and instantly fell in love with this place. Although it had a very sports bar meets biker bar look to it, there was something very calm and comfortable about the giant space. With part of it being set up as a restaurant, part of it set up like a bar and then a huge and professional looking stage, nothing seemed to fit together but it all worked perfectly and it set the stage for a great night regardless of how many people came out or what I knew (or didn’t know) about the performers.

The crowd was sparse (and that’s putting it nicely) as Chicago band Trip 6 took the stage. I absolutely adored the fact that, although there wasn’t a giant crowd right in front of the stage for them, the members of Trip 6 didn’t hold back and gave everyone in the bar everything they possibly could. Full of energy and a sound that bridged the gap between the greats like Pantera and a more radio-friendly sound like that of Godsmack, their sound may have not been 100% my cup of tea but their show most certainly was. I was so blown away by the energy and conviction they had on stage that I couldn’t help but feel sorry there wasn’t a bigger crowd to enjoy it. Trip 6 has a big sound and a sound that, although you can easily point out some of their influences here and there, stands out a bit more than other bands in the radio-rock genre. I suggest you don’t sleep on this band.

Following Trip 6 was a band that I have yet to get sick of seeing live- Impaler. I mean, come on, it’s Impaler. I remember dreaming of my first Impaler show as soon as I chose the Twin Cities as my new home for college (they are local to the Twin Cities)– I never thought it would lead to multiple run-ins with this band and even getting on a first name basis with vocalist Bill Lindsey, but I digress. You’d think that having covered them damn near a dozen times I would have run out of things to say but I haven’t. Their 80’s glam metal meets horror metal meets heavy metal meets every metal in between sound is infectious and their live show is truly captivating. From the blood and guts spilled on stage and wrestling moves to their flawless sound, Impaler is one of those bands with a live show that I could write a book on and still leave thoughts on the table. The crowd that had been reluctant to leave their tables during Trip 6’s set had made their way up to the stage for Impaler just solidifying my idea that these guys are one of those bands that you just have to see up close in order to really understand it all. I won’t keep on praising this band because if you’ve been following my posts for awhile then you’ve heard it all before, but I will say– Impaler– you just have to see them.

The final group to performing on Wednesday night was Steve Grimmett’s Grim Reaper (but for laziness purposes, I’m going to keep saying it was Grim Reaper). Grim Reaper is a British heavy metal band that came out during a wave of heavy metal bands in 1979. As mentioned, I knew nothing about Steve Grimmett (the original vocalist) or Grim Reaper when I walked into the show last night but, as soon as the four-piece took the stage and Steve opened his mouth to sing, I understood the influence and power of this band. Although decades have passed (this was actually Grim Reaper’s first Twin Cities show in 32 years), Grim Reaper hasn’t given in to the modern metal sound. They have stayed true to the sound of the olden days which was somehow refreshing and made last night’s performance one that stands out from the rest of my concert schedule which seems to revolve around bands that just scream as loud as they while playing notes as fast as they can.

There was a sense of respect that radiated from the stage to audience and vice versa was truly a beautiful thing. The crowd was respectfully rowdy and Steve Grimmett and his band were full of energy but also maintained a sense of professionalism. It was clear that they had all been doing this for a long time but it was also easy to see and feel that their passion for the craft of heavy metal is far from gone. Grim Reaper’s set was clearly all about the music but that didn’t stop Steve from joking around with the crowd between tracks. Before even kicking into the first song, Steve joked about how long it has been since he has performed in the Twin Cities and admitted to having a few more limbs last time he was here (he tragically lost his leg after a battle with a nasty infection a couple of years ago). The personality behind Steve was something that I instantly fell in love with and, when coupled with the throw-back jams and a flawless performance, I was left with so much more than I thought I would get from a Wednesday night show out in the burbs.

Last night was an adventure for me due to the new surroundings and sounds but there was something so familiar and comfortable about it all when the night ended. You may be in a new spot surrounded by new faces but if you have some great music, you can feel comfortable anywhere.

Average Age of the Crowd-42