I See My Demons Staring At Me Now 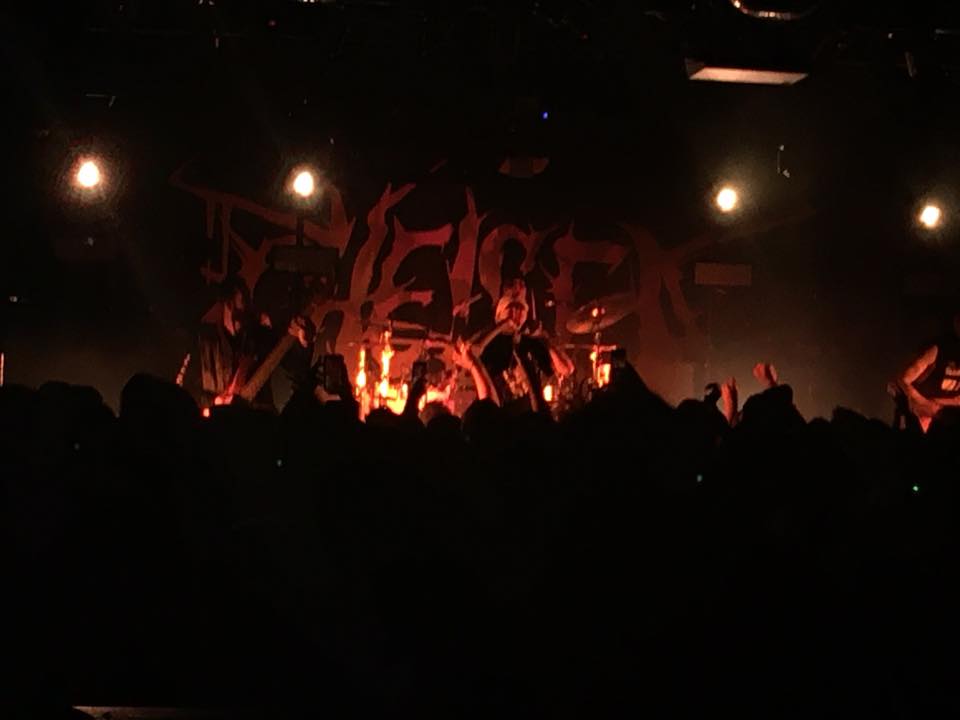 It was hard to leave the apartment last night. After a quick nap and a quick bite to eat, my clock said 5:30 PM but the outside said 1 AM. The reality that winter is here in the Twin Cities is a hard pill to swallow and coming to terms with the fact that it will be dark when I leave my house every morning and dark when I leave my day job every day is even tougher to come to terms with. I’m thankful that I have my shows to keep me from falling into the hole that is seasonal depression and last night was definitely one of those shows.

West Virginia based Left Behind was first on the impressive and stacked five band bill. Sadly, due to my reluctancy to leave my apartment and the fact that it was still rush hour when I tried to scoot from Minneapolis to Saint Paul, I missed the first couple of songs of Left Behind’s set but that didn’t stop me from being thoroughly impressed with the few I did get to catch. Their blend of metal and hardcore brutality was exactly what the packed crowd needed to get into the mood for what was to come and although Left Behind was only on stage for about twenty minutes, their set definitely packed a punch.

Traitors took the stage quickly after Left Behind and instantly shoved the crowd into a frenzy. I’ve been seeing the name Traitors everywhere lately and I’ve gotten to know their logo well but I had never taken the time to sit down and listen to them. What a mistake. Their heaviness had a sense of perfection and, well, brutality that was like a breath of fresh air. There was something easygoing about vocalist Tyler Shelton. His movements seemed cool, calm and collected but his vocals were anything but that. Chaotic, insane… you chose the word to describe their sound but the only word to describe their live show is energetic. We were only two bands in and it was barely 7PM by the time Traitors left the stage but I was already in love with every moment of this show.

Up next was Spite- another band that I’ve been seeing all over social media but have yet to really dig into. I honestly think I had subconsciously written this band off just having seen their name all over the place but that changed last night. As soon as Spite stormed the stage it was not only game over for my lack of knowledge when it came to this band, it was also game over for half of the audience. A clear crowd favorite, as soon as the house lights went down and the band kicked into their set, the audience turned into nothing more than a sweaty, violent (but in the Minnesota nice kind of way) mess. I couldn’t see much as I had decided to stick to the back of the venue due to old age and exhaustion, but what I could see were flailing limbs and whizzing lights. That was all I needed to see because everything else could be felt and the amount of appreciation that went from crowd to stage and vice versa was more than enough to tell me everything I needed to know about this heavy band. I’ve been resistant to this whole “Spite Cult” thing (a phrase written on their merch) but after seeing them live last night, I get it and absolutely fell in love with it.

Although I was unfamiliar with the first three bands on Tuesday night, I was more than familiar with the fourth. I’ve been listening to The Acacia Strain for years now and, although I’ve seen them plenty of times, I never pass up the opportunity. TAS has a sound that refuses to be put into a box but incorporates all of my favorite genres including punk, hardcore and metal. Having a unique sound has never been enough for this band and their live show is something that I often crave on a rainy day. The band was in full force last night taking advantage of the fact that there was no barricade separating the band from the audience. With a seemingly endless stream of crowd surfers and stage divers flying through the air, TAS powered through a set that I wish could have lasted for a least a couple more hours. Although their energy and music is intense and brutal, there’s something comforting about this band and that side of the group was highlighted as vocalist Vincent Bennett explained that everyone is welcome at a punk, hardcore, or metal show and that’s why he was drawn to the scene. Full of heart and energy, I was winded by the time The Acacia Strain left the stage and I wasn’t doing anything insane and was far from the pit. I was drained purely because of the joy that watching The Acacia Strain brought me and the vibes they put into the air at The Amsterdam.

The icing on the cake of this already incredible show was headlining act Chelsea Grin. Chelsea Grin has been perfecting their deathcore sound since 2007 and have been on the grind for years. They are one of the harder working bands in the metal scene and a band that, although I’ve never really gotten huge into, I have an undeniable sense of respect for. Although the crowd had to have been exhausted by the time Chelsea Grin hit the stage, they didn’t hold back from one final gasp of energy throughout the headlining set. The intensity and brutality laid out by the previous bands was only highlighted as Chelsea Grin powered through their set and, when it was all said and done, the exhausted and overheated crowd seemed to still be wanting more.

Five bands on one show is always a little overwhelming but something about last night kept it from feeling overwhelming. Typically after such a large metal show, I’m exhausted and ready to go home and pass out but the energy of last night’s show left me wanting more regardless of how badly my feet heart or how much my ears were ringing. Who has time to get down in the dumps about the darkness taking over Minnesota when you have shows like Tuesday night’s show?

Average Age of the Crowd- 23

Broken Bones- None Spotted But People Were Surely Hurting Today

Celebrity Sightings- Adam and Dustin of By The Thousands; Lee of Mithya