Baby, You Got One Chance And Legends Never Die 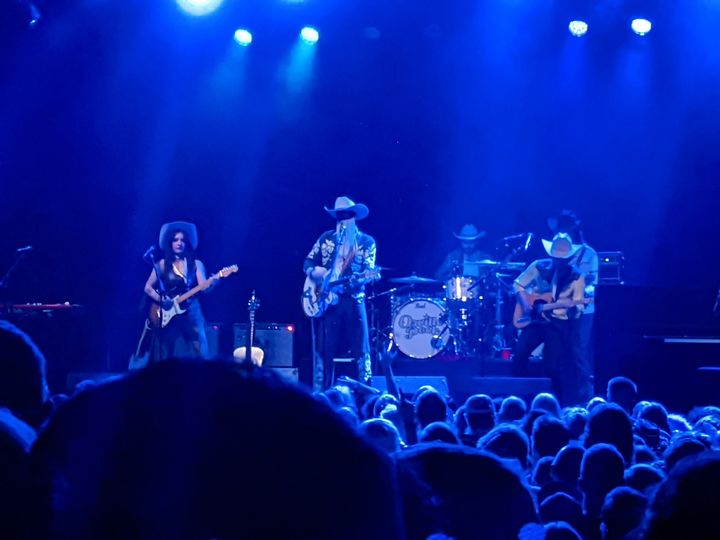 I own a pair of cowboy boots. I honestly don’t know why, but I do and rarely wear them. Apparently, last night would have been a perfectly acceptable night to wear them out but I didn’t know that as I walked into a sold-out First Avenue on Saturday night. It’s not that I didn’t know who Orville Peck was. I had heard his name countless times and knew a bit about his mystery (more on that later) but I don’t think I put it together that he is really more of a modern-day Johnny Cash than anything else. I was bummed I didn’t have my boots on but thoroughly enjoyed looking at everyone else’s outfits that came complete with boots and cowboy hats. Seriously, people had gone all out for the Saturday night show and I don’t know why, but I was a bit surprised and it added a thrill to the show that I wasn’t quite expecting.

Kicking the night off as the sole opening act was The Nude Party from North Carolina. This six-piece band not only filled the stage but also filled the room with their fun and southern-twanged tracks. Although their sound lacked the typical punk or metal aggressive edge that I tend to look for, they had me wrapped around their fingers throughout their forty-minute set. My two favorite parts of their set were obvious. First, it was the kazoo solo by vocalist Patton Magee. I mean, come on, a kazoo on the First Avenue main stage? Yes please and thank you! The other was their song that seemed to bash the music industry in a very honest and raw way. Although a super catchy and fun track, the lyrics spoke about wanting so badly to sell out to the man and get a record deal but realizing it’s not all that it’s chalked up to be. I loved everything about that track so much and plan on spending the rest of my day trying to find it and then proceeding to listen to it on repeat.

The Nude Party’s sound is unique but accessible and that really makes them stand out in my mind when compared to all of the other bands I have seen lately. Although they definitely weren’t my typical cup of tea, they are a band that I will be keeping my eye on and would kill to see live again. There was just something so fun and carefree about their set that I truly needed after spending my day running around like a chicken with my head cut off. They allowed themselves to have fun on stage but didn’t forget that they were there to make music and make some lasting impressions on the sold-out crowd so that’s exactly what they did and to say they left an impression on me would be an understatement.

Who is Orville Peck? That seems to be the million-dollar question these days. Many people know his name and know him as the man who wears a face mask with some epic fringe hanging off of it to cover his mouth but, the truth is, nobody knows who this man actually is. Sure, there is some speculation out there but he has never shown his face publicly but that is all beside the point. Orville Peck has been turning heads lately and even though he has only been around for about five years, was performing his first-ever show at First Avenue that was sold out to the brim with a second night to follow on Sunday. Orville Peck is clearly the world’s new favorite musician and to be able to see him on the legendary and fairly intimate First Avenue stage is something that I will not forget.

As mentioned, I knew his name and knew some of his story but I knew nothing about Orville Peck’s music so when he kicked into his nearly twenty-song set, I was a little surprised to hear that he is essentially the new Johnny Cash. My friend who was working at the club on Saturday put it in the best way– it’s like if Johnny Cash and Dolly Parton had a child– that would be Orville Peck (okay, I think there was another step in that but I can’t remember and I think you still get it). The Nude Party’s music definitely was a bit out of my comfort zone but the music of Orville Peck was in a whole other dimension when it comes to what I’m used to. His dark yet soothing voice was almost hypnotic but the overall sound was just not for me. That being said, the energy that Orville and his band displayed on stage and transferred into the crowd was more than enough to keep me in the palm of his hand throughout the night.

Orville Peck encouraged the crowd to dance, cry, and sing along (especially if you didn’t know the words). That mixed with the amount of clear love and admiration that was in the room was all I needed to be sold on all things Orville Peck. Although I definitely felt a bit out of place just due to the music that was blaring through the speakers, the overall feeling throughout the audience had me feeling right at home. Everyone was smiling, dancing, and just having a jolly ol’ time without being too over the top or anything. It seemed like a chill night but with a party atmosphere which I know makes no sense but would make perfect sense had you been there.

The highlight of Orville Peck’s set for me was his cover of The Replacements’ “Can’t Hardly Wait” but that was such a small moment of a truly stunning night. Anyone who was smart enough to snag a ticket to Saturday or Sunday night’s show got a treat. I truly think that the next time Orville comes through town he will be at The Armory if not one of the arenas. What a treat!

Amount of Beer Spilled On Me While Walking Around- $12