I Should Have Sown My Heart In My Chest 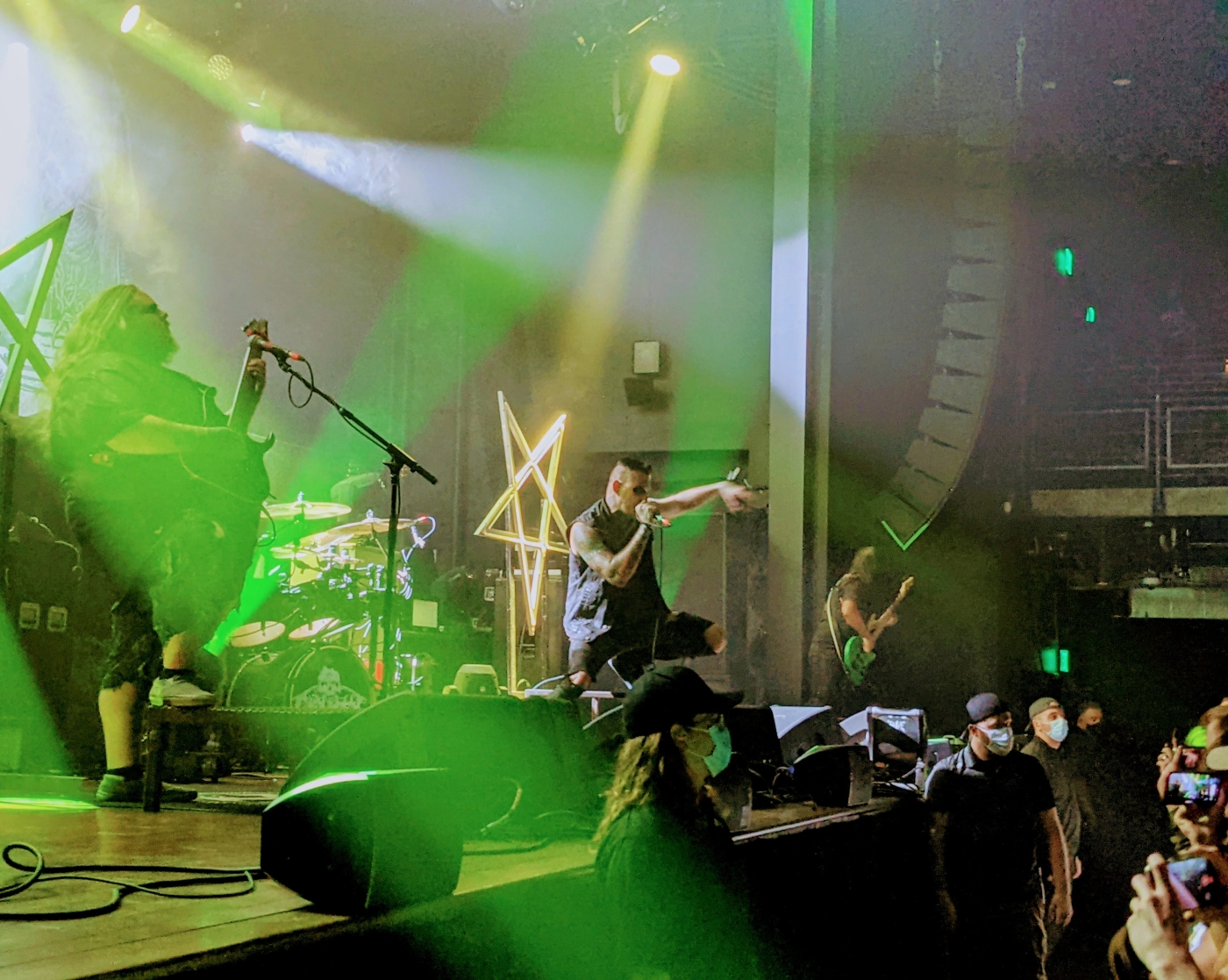 My tour of venues post-pandemic continued on Saturday night at The Fillmore. I’ll be honest, I was a little nervous that this venue may not make it through the pandemic. They had just opened prior to the shutdown and had only hosted a handful of shows. Thankfully, this venue has come back to life and then some. With a line wrapping around into a nearby parking lot, I waited with anticipation to get into this beautiful place to catch one hell of a show.

Undeath got things started on Saturday night and they started it off right. Their crushing death metal sounds were ringing through the venue as I weaved my way through the excited audience. Sadly, their set was super short and, by the time I finally got to a good spot, this band only had two tracks left but they packed so much into every song that I still feel like I got a good taste for this Rochester, NY based band. Power and aggression were at the forefront of their set and they were the perfect act to get the packed house warmed up.

Following Undeath was a band that I’ve caught multiple times- Rivers of Nihil. This band has such a unique sound and a true passion for technical songwriting. Just watching the members of this group is always so captivating and Saturday night was no different. Although they definitely weren’t one of the more well-known bands on this five-band line-up, they clearly had the audience right in the palm of their hands and it was a stunning thing to see. All of the other times that I have seen Rivers of Nihil have been at smaller and more intimate venues and I was afraid that their sound and energy may not translate into the bigger Fillmore but they had no problem commanding the entire building.

Carnifex is one of those bands that I tried to resist for so long for some reason. I honestly couldn’t tell you why but, after seeing them a few times, they are a band that I just can’t get enough of. They always come to the stage with a powerful show and that’s exactly what they did on Saturday. Sadly, they only played four songs and that was a complete let-down. This band has so much power and so much energy that it’s stunning and I could have watched them for hours so to just get four songs was a bit like a slap in the face. Much like Undeath, even though they only had time for a few tracks, every track packed a punch and had the audience pushing and shoving their way until the abrupt end.

Maybe Carnifex’s set was so short to give After The Burial some extra time which, if that’s the case, was more than fine with me. After The Burial are the hometown heroes of the Twin Cities. They are the band that made it big and truly put the local metal scene on the map and they proved how and why they are the band within the first song of their set. Although true superstars in the metal scene, this band has never forgotten their roots and you could feel that throughout their set. There was an undeniable sense of admiration and love that radiated between the stage and audience that was just absolutely beautiful. This band has been through some stuff over the years (which I won’t get into now but feel free to read some of my past posts about this band) so it was nice to see them still on top. It was also nice to hear vocalist Anthony Notarmaso address how hard this past year and a half has been regardless of who you are. He admitted to having a beautiful wife, child, house, everything yet still found himself struggling through the “pandi”. I think that mental health is kind of hidden in the metal scene so it truly made my heart flutter to hear him address it and bring it to the spotlight.

Kings of the death metal scene, The Black Dahlia Murder, closed out the night without letting the energy of the previous bands fade. Since 2001, this band has been on the top of the game and it was truly an honor to finally get the chance to see this legendary band live. Their nearly twenty-track set seemed to fly by in the blink of an eye. I found myself with my eyes glued to the stage as I watched this band powered through track after track. Unfortunately, it was abundantly clear that a lot of the audience had gotten what they wanted (meaning After the Burial) and the crowd was considerably thinner by the time the headliner took the stage. That being said, if you were one of the smart ones that stayed until the very bitter end, you absolutely got what you came for and then some.

Crowd Surfers- 32 Counted but I’m sure there were more

Spotted Flying Through The Air- Bodies/p>