And I Crash My Car Cause I Wanna Get Carried Away 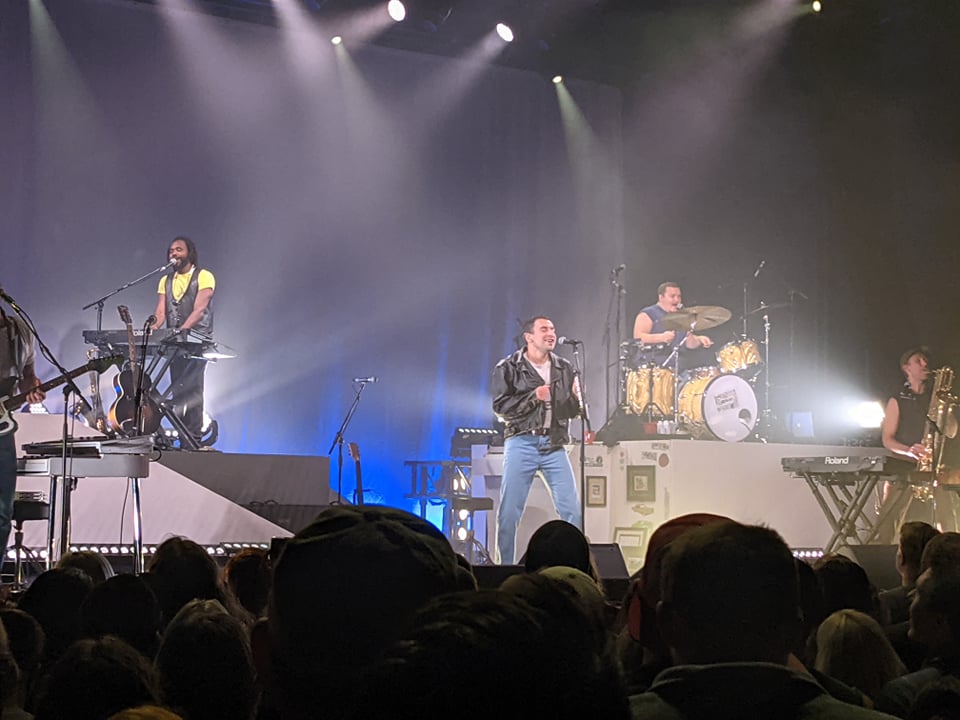 There was a rush of energy throughout the venue every time someone took the stage on Tuesday night. Even if it wasn’t a musician and just a tech or production team member, there was cheering and applause. It really set the tone for the night. You could feel the excitement and hear the thrill throughout the sold-out audience.

Kicking things off was Chicago-based Claud. Claud Mintz is a bedroom pop singer-songwriter that, although their music was a bit slow-moving for my liking, really set the tone for the night and eased everyone into the fury of what was to come. I loved the way that Claud was able to captivate the audience so effortlessly while not being the most upbeat opener I’ve ever seen. Please don’t misunderstand my words- I thoroughly enjoyed Claud, I truly did and I think they have an amazingly bright future, I was just in the mood to party and their bedroom-pop tendencies just wasn’t hitting the spot like I wish it had. The first artist to sign onto Phoebe Bridgers’ record label Saddest Factory, there was no denying the pure talent behind this musician. Claud somehow came off as young and fresh while having an old soul full of pain and passion. Although not a new musician, based on the chatter throughout the crowd after Claud’s quick thirty-minute opening set, it was clear that they were new to this crowd but the crowd, myself included, is ready to make Claud a favorite and I wouldn’t be surprised if Claud announces another show here soon. When that happens, you best believe I’ll be there to support this brilliant musician.

The stage change-over between Claud and headliner Bleachers seemed a bit lengthy and I could feel me and my friend starting to get a bit frustrated and bored but all of that went out the window the second the band took the stage and jumped into what can only be described as an explosive set. I’ve seen Bleachers a few times now and although the last time I saw them (okay, I know technically Bleachers is a solo project but it’s a full band so I’m going to refer to them in the plural), I was a wee bit less than impressed, I was excited to see what they had been up to over quarantine and see if they could recover from that last show that left me disappointed.

The band, fronted by Jack Antonoff (of Steel Train and Fun) jumped into their nearly twenty-song set and the audience catapulted from a sleepy yet energetic crowd to an audience full of passion and heart. Every song that the band played through was met with an audience screaming back every single word while bouncing around to the infectious beats. It was quite clear that the audience was feeding off of the energy from the stage and vice versa creating an electric atmosphere that didn’t dissipate until everyone was flooding onto the street at the end of the night. Of course, there were some songs that seemed to draw out more energy from the crowd like the hit singles “I Wanna Get Better” and “Rollercoaster” but there was really never a moment throughout the expansive nearly two-hour set where the energy faltered.

Reading back in my old review of Bleachers’ 2017 show at The Cabooze, I complained a bit about how it lacked a sense of personal touch and personality and felt like a mass-produced concert for a band that should be so much more than that. Although I got that feeling at the beginning of Bleachers’ set on Tuesday night, it quickly fell to the wayside as the audience was treated to more and more of Jack’s quirky personality as the show went on. At one point, a Future Farmers jacket was thrown on stage (Jack had been wearing one from Washington earlier in the night). “Is this a gift or was this a mistake?” he asked the audience. Being told it was a gift, he started digging into the pockets of this fresh jacket only to find a mask, vaccine card, and even car keys. “This is not a gift- I appreciate it but I’m giving this back!” Long story short, the jacket was thrown back up on stage only this time with empty pockets and Jack retired his Washington jacket for this new one. It was a small moment in a long night of amazing moments but it was a moment where you could truly feel the appreciation that radiated from stage to audience and back.

Bleachers’ set may have started off a bit rocky for me due to both song choice and the fact that I felt there was some smoke and mirrors being played with when it came to the live performance but it didn’t take long for Bleachers to have me in the palm of their hand and, by the end of the night, I was left shouting to every word from every song like my life depended on it. Jack Antonoff mentioned that they like to perform every show like it’s their last and, after what everyone in the industry went through at the beginning, it’s really not a stretch to think that it could be. Although it’s something I always have in the back of my mind when I go to shows these days, it was a beautiful moment to hear someone like Jack acknowledge it and truly perform his heart out as if it was his last show.

Average Age of the Crowd: 18

Amount of Beer Spilled On Me While Walking Around- None

Spotted Flying Through The Air- A jacket